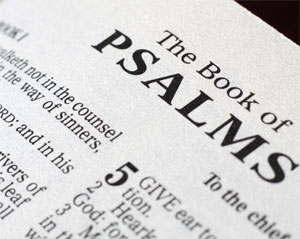 Today marks the launch on Godzdogz of a new series that will look at the Book of Psalms.

This book of 150 psalms has had a tremendous influence on the prayer life of the Church. In the Ordinary Form of the Mass we are used to hearing the responsorial psalm, perhaps even antiphons at different points in the Mass taken from the psalms. Those of you familiar with the Divine Office, or Liturgy of the Hours, will know that it primarily consists of psalms which are read cyclically, in the case of the modern Roman breviary, over a four week period.

The psalms are poetic and often express the deepest emotions and thoughts of the human person in their relation with God: exuberant joy and thanksgiving, vengefulness, despair, peace, to name only a handful. Praying the psalms can help articulate our deepest sentiments. They manifest the highs and lows of the relationship between man and his Creator. The 19th century Jewish scholar, Israel Abrahams, said, “In prophecy God speaks to man, in psalmody man sings to God.” This is certainly the case in many religious houses, where the Divine Office is chanted at different points in the day (and in some cases, the night!).

For believers in Christ, we have a new lens through which to view the psalms. The Church Fathers saw them as speaking of Christ. Pope St John Paul II said of the Church Fathers that they saw in the psalms Christ spoken of, and even Christ speaking. It is no wonder, then, the role they have played in the Church’s liturgical life.

Our hope is that this series will help deepen your and our understanding and love of the psalms. We will not look at all of them, but we will take a selection under different themes. We hope you will enjoy reading our posts.

All the posts in the series: