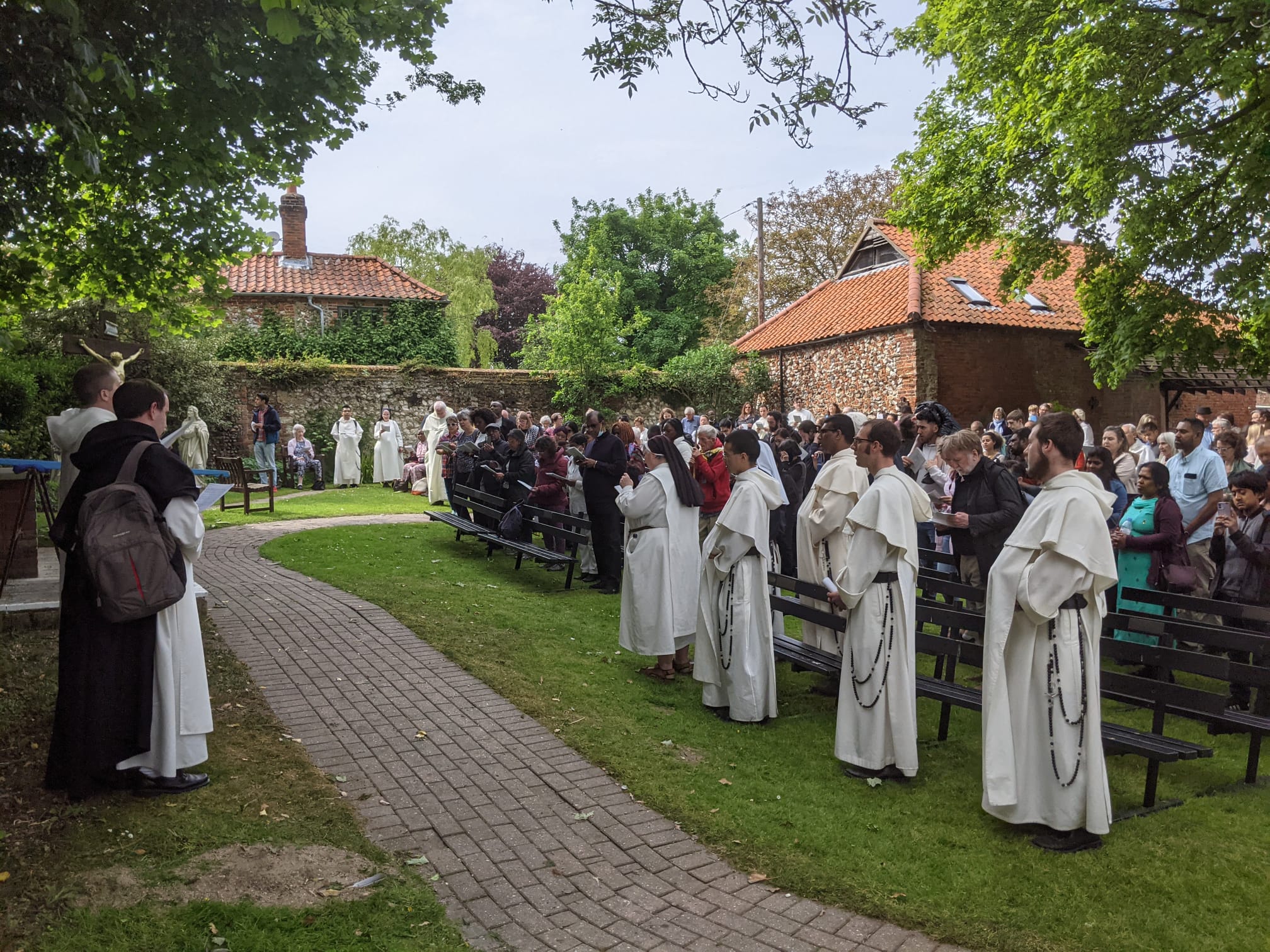 By Br Bede Mullens O.P.
439
2 Comments
Brothers from Oxford joined Dominicans from across the English Province for the first annual pilgrimage to Walsingham since 2019. Archbishop Malcolm McMahon celebrated Mass at the shrine at 12 midday. In the afternoon, the pilgrims, fortified by their picnic, processed the Holy Mile into Little Walsingham town. Br Bede wonders – why Walsingham?

Bitter, bitter oh to behold
The grass to grow,
Where the walls of Walsingham
So stately did show.
Such were the works of Walsingham
Whiles she did stand,
Such are the wracks as now do show
Of that holy land.
(From The Lament of Walsingham, a 16th century ballad)
I am never quite certain why we make pilgrimages to Walsingham. In the Middle Ages the reason was a bit clearer: Walsingham was England’s Nazareth, and pilgrims to Walsingham were really pilgrims to the Holy House of Jesus, Mary, and Joseph. Their pilgrimage was a schooling in Christian life, and their destination the humble dwelling God deigned to call his home.
There now is no Holy House at Walsingham. Ironically, the Catholic shrine is in fact what used to be the final staging post on the way to the end-point. The Slipper Chapel is so-called, because penitent pilgrims would there remove their shoes, barefoot to walk the final holy mile. Who goes to Walsingham nowadays, goes to a staging post to no-where. Yet this is England’s premier Catholic shrine, a place very close to the hearts of so many of the faithful. What do they all come for?
If Walsingham cannot any longer claim to be England’s Nazareth, yet it remains a focus of Catholic hope. The ruins of the former shrine and priory stand out like great stone welts, ‘bare ruined choirs’ dead upon the verdant green:
Owls do scrike where the sweetest hymns
Lately were song,
Toads and serpents hold their dens
Where the palmers [pilgrims] did throng.
Only, the sweetest hymns do now sound. We were there, singing them along the holy mile. If the old buildings have not been restored, yet devotion has been reconstructed – and what a rich devotion, from so many such diverse communities, a truly catholic devotion in the heart of little England. Walsingham, by the presence of ourselves and so many other pilgrims throughout the year, is a sign of the marvellous ways God continues to make his Church fruitful even in such unpromising terrain. We cannot now expect a return to pre-Reformation England, but the Spirit does not cease to animate us; we may have no Holy House to approach, but he continues to push us on our pilgrim way.
Our hope, says the Letter to the Hebrews, is no-where visible. It is in heaven, where Jesus has gone before us, the anchor that secures us and pulls us forward. ‘And we are his house if we hold fast our confidence and pride in our hope.’ The past and the present of Walsingham, for all the sad wreckage of sin it displays, provides an instructive lesson to the Catholic Church in England today. We cannot expect a lasting home, set in stone, on earth below; we cannot expect the securities of a total, homogeneous Catholic culture. We must be reconciled to the precarity of our position, as well as the promise it holds. Yet we are not without direction. We pilgrim on to our heavenly homeland, looking forward with our brothers and sisters to a common hope, confident of the faith that is in our hearts, ready in love to preach the Gospel that is meant for all people.
Walsingham, an out-of-the-way village, is not the kind of place that naturally excites the attention of Friars Preachers. Going there, the Church preaches by simply carrying on.
A selection of photos from the day: 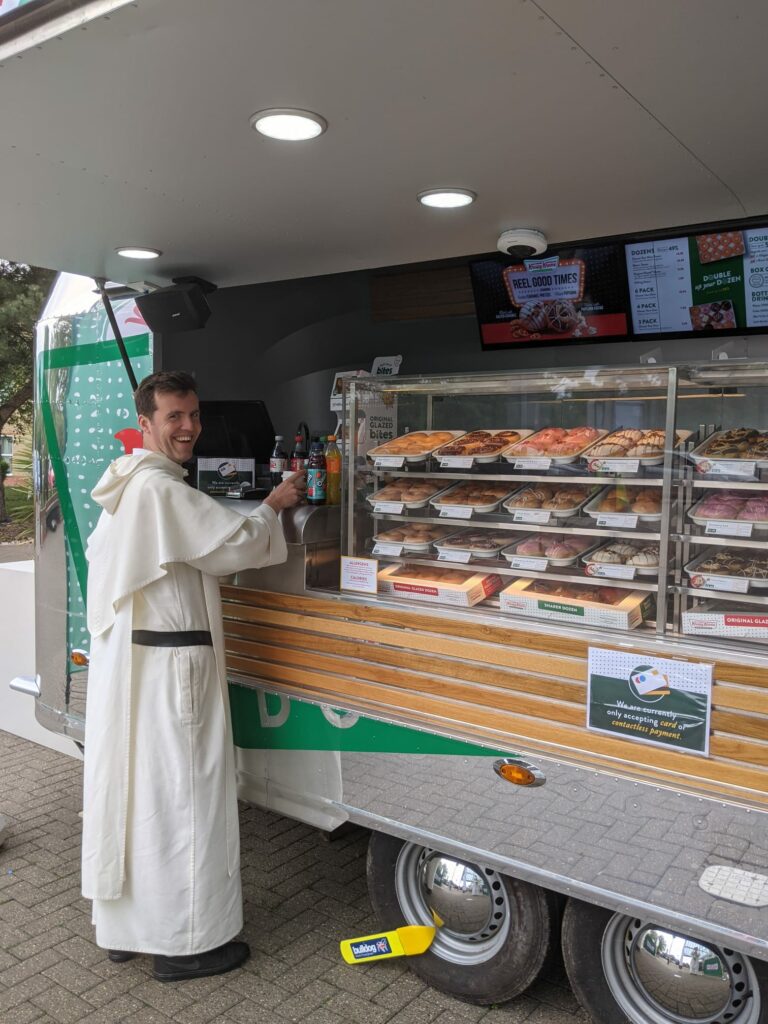 Acquiring supplies for the long journey. 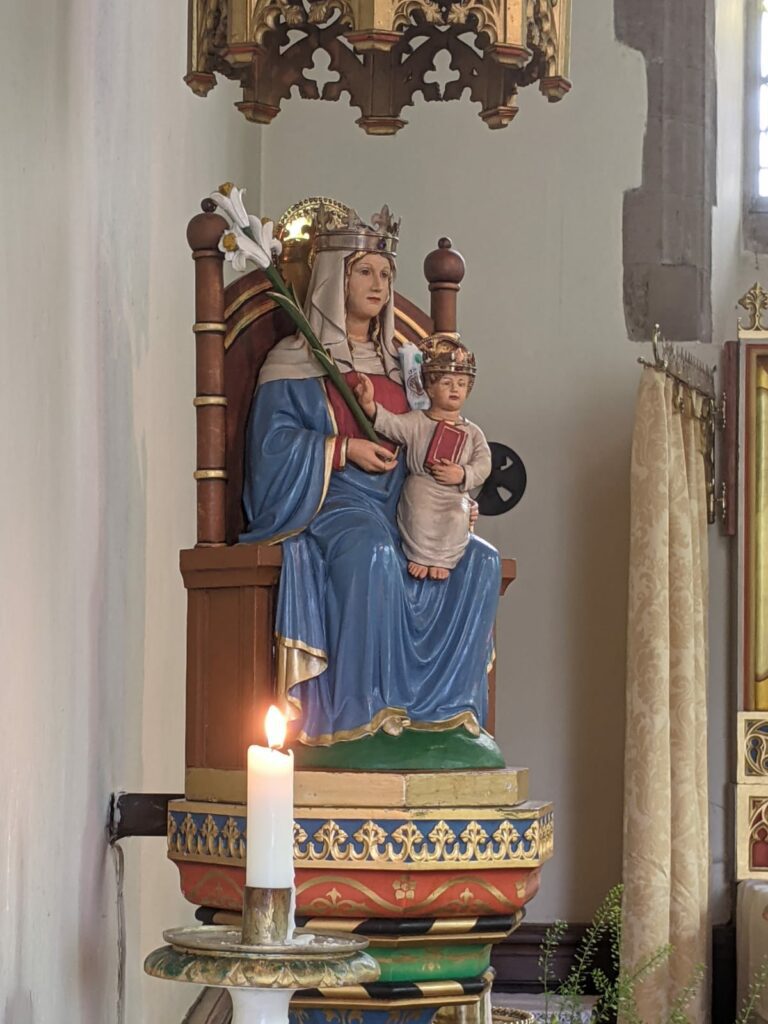 The statue of Our Lady of Walsingham, in the Slipper Chapel 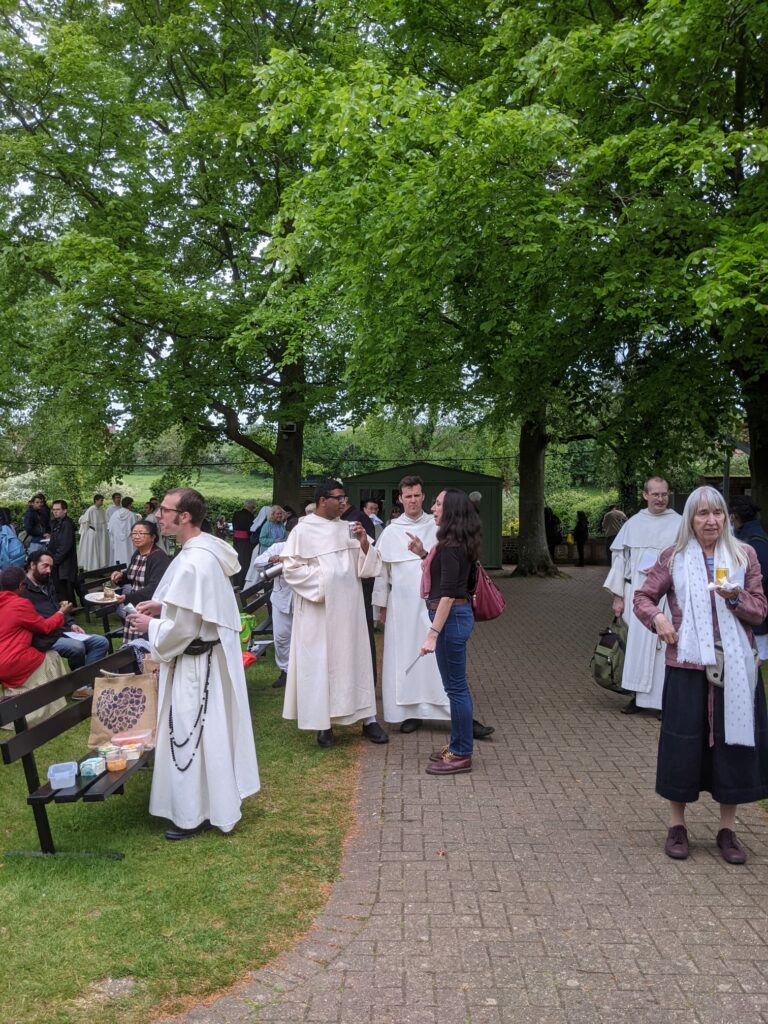 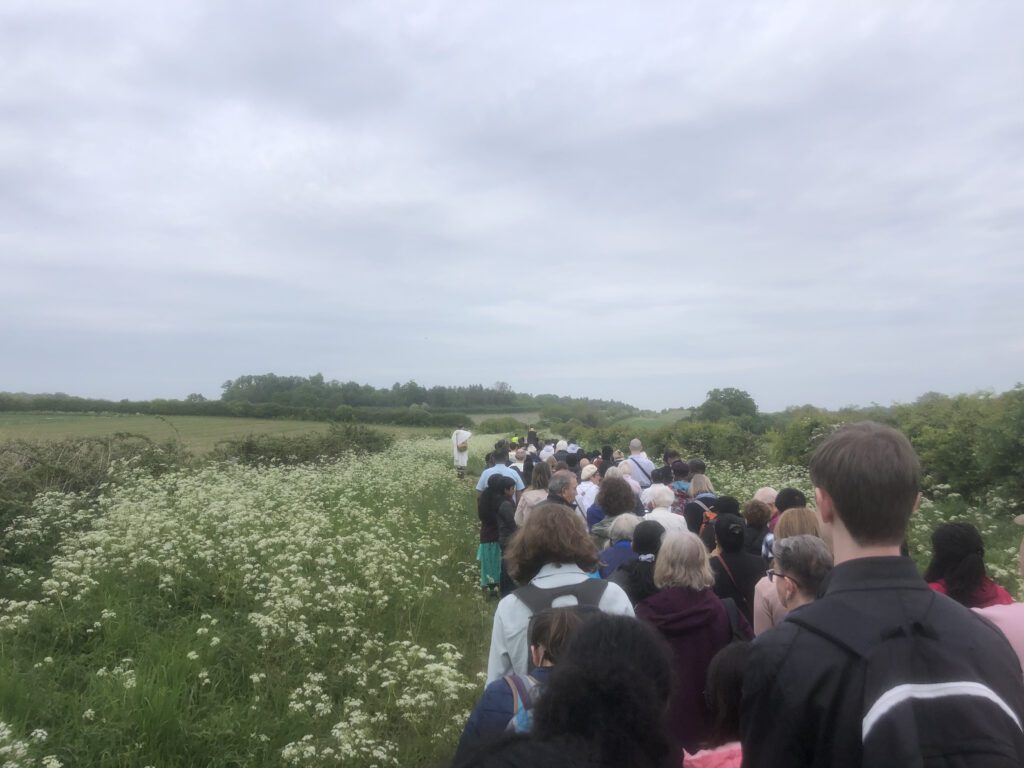 Pilgrims walking along the Holy Mile whilst praying the rosary. 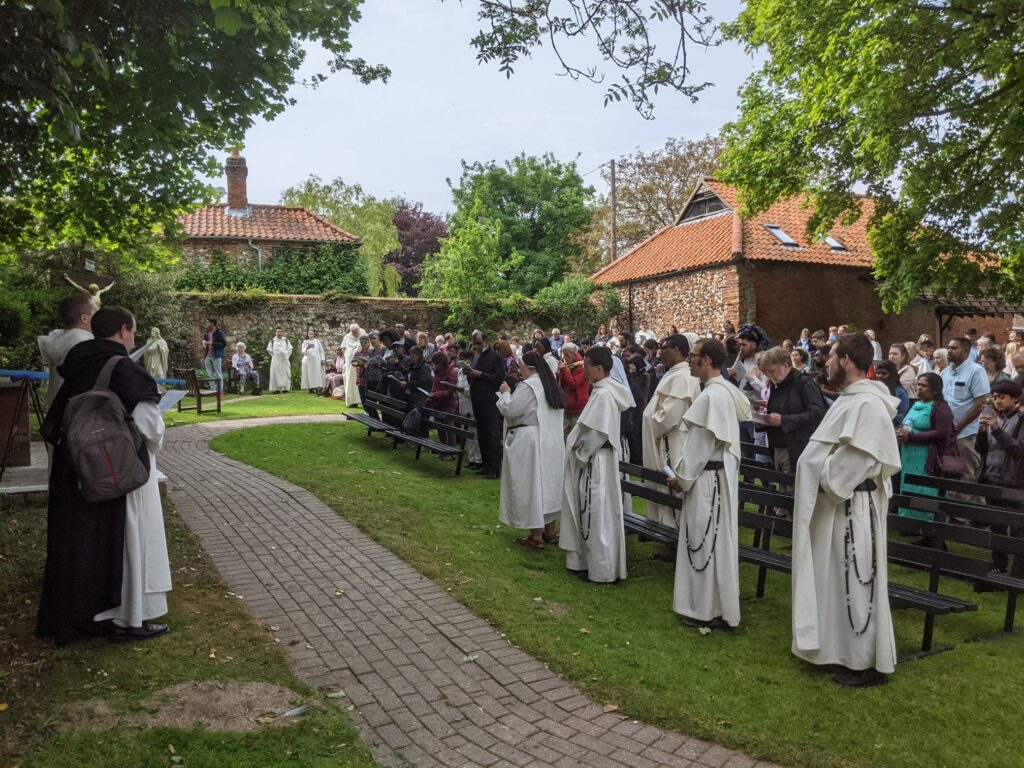 Singing the Salve at the end of the procession along the Holy Mile. 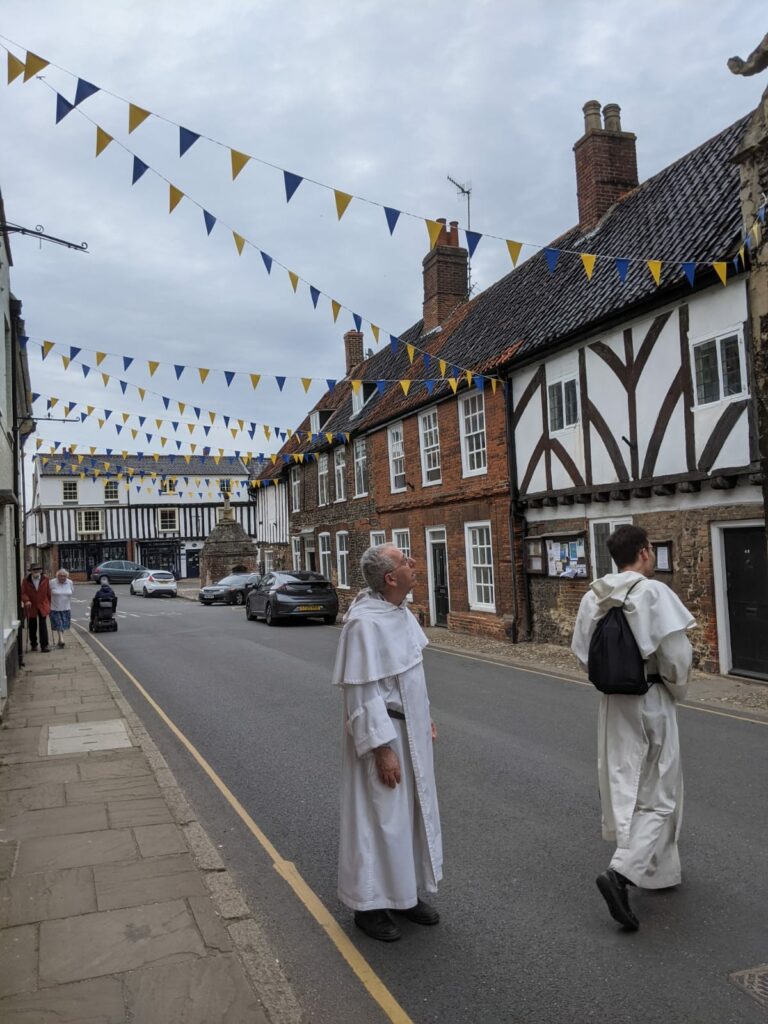 Admiring the sights and scenes in the village. 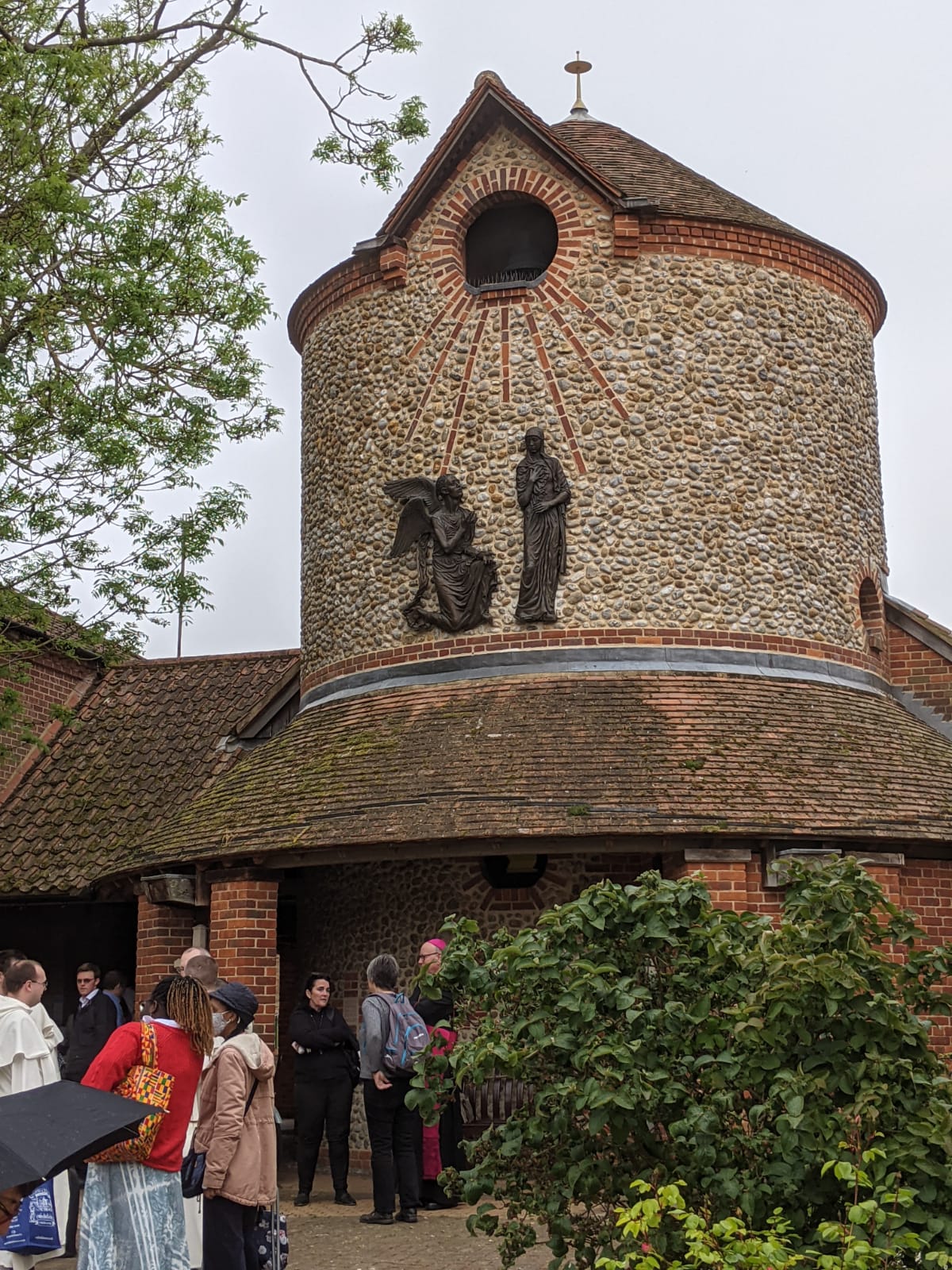 Pilgrims mingle outside the parish in Walsingham, where we concluded the day with Vespers and Benediction.