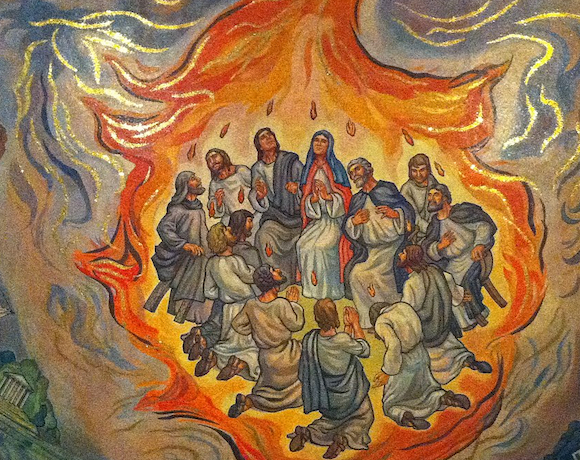 Godzdogz
Home  /  Godzdogz  /  Our God is a consuming fire

Our God is a consuming fire

By Br Albert Elias Robertson, O.P | In the first of our new series of reflections on the Thursday Gospel, Br Albert looks at the fire that Christ sends, not one that destroys all in its path, but one that “consumes vice, confirms virtue, and offers the world true peace”.

The chapters of Luke’s gospel which we’ve been hearing at Mass over the past weeks have all been set within the context of Jesus’ long journey to Jerusalem beginning back in Chapter 9. The question behind these accounts is, ‘What kind of a man is this?’ The main concern is whether this man, Jesus, is from the devil — whether he casts out demons by the prince of demons — or whether he is truly from God. And if he is from God, who is he — John the Baptist raised from the dead, or Elijah returned, or some other prophet? Jesus is in continuity with, and is understandable in the context of earlier prophets. But there is clearly something new here; even the seventy disciples report, with some apparent consternation on their return, that even the demons are subject to them by using the name of Jesus.

If we think of Jesus as another Elijah, or Elijah himself returned, we might expect the fire which Jesus speaks of to be the consuming fire which Elijah rained down on the soldiers of the king of Samaria who had been sent to kill him (2 Kings, 1:10; 12). But Jesus has already rebuked his own disciples for wanting to bid fire come down to consume an inhospitable samaritan village (Luke 9:54). So the fire here does something different, for it will not consume and destroy what is in its path. But there is certainly still a judgement here; when he sent off his seventy disciples, Jesus tells them to shake the dust from their feet against a town or village which refuses them. On the day of judgement, the fate of those places will be worse than that of Sodom.
In speaking of fire in this passage, Christ associates it with the baptism with which he must be baptised, with his death and resurrection, and while Jesus forbids the disciples to call down fire from heaven upon unwelcoming communities, Jesus himself will bring down fire upon an unwelcoming community, upon Jerusalem, both in the burning charity of his passion, and in the sending of the Holy Spirit in the form of flame at Pentecost. This fire is the greatest, purest, and most perfect judgement, because it is God himself who is judging. There is also intensity to this fire of judgement, and of Christ’s desire to undergo his baptism, which is seen in Luke’s choice of words. Luke tells us that Jesus is constrained or in anguish for his baptism to be accomplished. The word translated as anguished or constrained here is quite often used to express the way in which people are seized by fear at a work performed by Jesus, or to describe the feeling of being hemmed in by a crowd. It pictures quite vividly something welling up within Jesus, like a liquid under pressure to escape. It seems to convey the idea that once the Holy Spirit is sent, there’s no way of stopping its flow out into the world. Just as Elisha receives a double portion of Elijah’s spirit when Elijah was taken up, so the Church receives this unstoppable gift of the Holy Spirit at Christ’s Ascension.
Christ’s death and resurrection is a moment of judgement, a judgement which brings a division. While the Pharisees and the lawyers whom Jesus denounces are plotting against Jesus, in Luke’s account of the passion, the people are more divided. The verdict against Jesus is not the unanimous will of a mob stirred up by the authorities; the women of Jerusalem weep on seeing Jesus being taken away for crucifixion; and at his death comes not only a recognition that Christ is innocent, but also sorrow as those who are in attendance leave beating their breasts. From the beginning of his life, Jesus has been marked out by the prophecy of Simeon as a sign of contradiction, destined for the falling and the rising of many in Israel, and this is the key to understanding why it is that Jesus comes to bring division. The fire which Christ will bring to the earth and the baptism he must undergo offers a peace which some will accept and others reject. Once the fire has fallen on Jerusalem, this acceptance and rejection becomes a universal question in Acts, where the preaching of the apostles will bring together some of those scattered by sin into the unity and peace of the Church, while others reject it. And we ourselves can also be divided in our hearts, as sin and vice reject the peace which Christ offers us.
Our God is a consuming fire (Deuteronomy 4:24; Hebrews, 12:29), and each time we fall into sin, suffer rejection, fail in some apostolic endeavour, when we in any way experience that division which Christ’s offer of peace brings, either in our hearts or from outside, all we need to do is to return once again to the Lord. The Lord who sends the consuming fire of the Holy Spirit into our hearts; not a fire that destroys all in its path like the fire that Elijah called down to kill the Samaritan soldiers, or the fire that the disciples wanted to destroy the Samaritan village; but a fire which consumes vice, confirms virtue, and offers the world true peace.