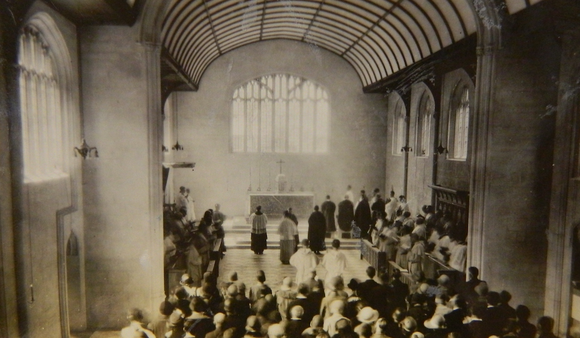 Godzdogz
Home  /  Godzdogz  /  The Dedication of the Priory Church, Oxford

The Dedication of the Priory Church, Oxford

Mass Readings: Acts 7.44-50; Matthew 16.13-19
‘Who do you say that I am?’ – Who is this Jesus? Peter answers for us all: ‘You are the Christ, the Son of the living God’. This Jesus, from Nazareth in Galilee, Mary’s son, the carpenter’s boy – he is the Son of God.
But suppose we put the question the other way round, and ask instead: ‘Who do you say that the Son of God is? Who is the Son of God?’. Well, surely the answer is just, Jesus, from Nazareth in Galilee, Mary’s son, and so on. Only, on closer inspection it isn’t so simple. Jesus was conceived and born, he came into being sometime (scholars speculate) around the year 4 BC (don’t ask me how you work that one out!). Yet the Word of God was in the beginning and before all time. The Word became flesh; the Word as such is not fleshly. So, there is more to the Son of God (God the Son) than the humanity of Christ. Or think of it this way: Jesus was born of the Virgin Mary, suffered under Pontius Pilate, was crucified, died and was buried, and descended into hell, and on the third day he rose again from the dead, and ascended into heaven and is seated at the right hand of the Father – but was God the Son ever absent from the Father’s side? Did God have to leave heaven, in order to come to earth? The answer is no: God is not bound by space any more than he is bound by time. God was not changed by taking up flesh – it was creation that was transformed.
Here is the essence of the paradox is put to us by St Stephen: ‘The Most High does not dwell in houses made with hands; as the prophet says, “Heaven is my throne, and earth my footstool. What house will you build for me, says the Lord, or what is the place of my rest? Did not my hand make all these things?’. God could not be contained by any building made by human hands; not even the whole creation can contain him.
And yet God made for himself a dwelling in the humanity of Jesus Christ, crafted in the womb of the Virgin by the overshadowing of the Holy Spirit. He did not make a dwelling, so that he would be contained, as if he had to shrink himself down to size. He made it to be with us – Emmanuel, God-with-us. God, the immense, the eternal, the ineffable – wholly available to you and me. It was for this that all the creation was made: God walked in the garden of earth with Adam and Eve, and he sits in the heavens that the angels may sing his praises. Yet heaven is just his throne, and earth is just his footstool.
We must not for a moment think that we celebrate today a God contained like an animal in a zoo, a prisoner in the tabernacle, a God who is forced to meet us by magical formulae or who has not power outside these four walls. Such a God would be no god at all. We celebrate God, the maker of heaven and earth, God the Father, Son and Holy Spirit, the blessed Trinity complete in its own joy – God who truly has no need of creation. More precisely, today we celebrate God, who has shared his joy with creation, God who has not shrunk himself, but raised us up to be sharers in his life. We may all be satisfied from the fountain, and yet the rush of waters is never diminished.

Christ’s humanity, you see, is a seed of the divine presence, thrown down into the depths of the earth. Out of the dead soil of our sin and mortality, he has put forth a shoot: for unless a grain of wheat should fall upon the ground and die, it remains but a single grain. Through this one human nature that God took to himself, a way has been opened for his creating Spirit to descend upon all people. Today we celebrate a God who was always with his creation, but has opened now a way for us to be with him; today we celebrate a God who became man without ceasing to be God, that we might become godly.

Image: Photograph of the Consecration Mass of the Priory Church, Priory of the Holy Spirit, Blackfriars, Oxford. From the Dominican Archive.