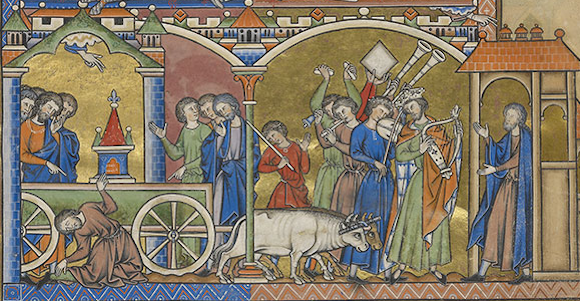 Godzdogz
Home  /  Godzdogz  /  Upon Pentecost and the Visitation

Upon Pentecost and the Visitation

By Br Albert Elias Robertson, O.P. | Our calendars often cause feasts to collide with each other on the same day, and this is true of today which would normally be the Visitation. Br Albert reflects on what we can learn from the collision of these two feasts of Pentecost and the Visitation.

In 1609, Good Friday fell on the 25 March, inspiring one of the great metaphysical poet John Donne to write Upon the Annunciation and the Passion of the Lord. For Donne this juxtaposition made for a doubtful day of feast or fast, but today’s union of feasts – that of Pentecost and the Visitation – gives us a reason for double celebration. The curiosity of calendars is that as well as providing the obvious stability to our life, where we know that one day will follow another, just as the months and years will pass by in orderly succession, they also bring about curious juxtapositions. This is perhaps especially true for us Catholics, where strange juxtapositions can be brought about by the interplay of the different calendars we follow, whether it be the four week psalm cycle, the two different lectionary calendars for weekdays and Sundays, right down to the pattern of Rosary mysteries we pray on different days of the week. Sometimes this means that we can find ourselves, for example, reciting the sorrowful mysteries on All Saints, with fruitful meditation on the path to sanctity through suffering.

But what of today? The Blessed Mother stands at the centre of both feasts, both in her meeting with her cousin Elizabeth, and praying with the apostles in the Upper Room. At the Visitation, Mary, the new Ark of the Covenant journeys south, like the transfer of the Ark of the Covenant by David, as recounted in the Second Book of Samuel. Elizabeth sounds amazed by her arrival, just as David did when he receives the Ark. The Ark, like Mary, travels up to the Judean countryside and is met with the joy of John the Baptist which even the womb cannot confine, just as David danced before the Ark. Just as the Ark stayed with Obededom for three months, so the Blessed Mother stays in the hills with her cousin for three months. Gabriel announced the conception of John the Baptist while Zechariah was at his priestly duties, but Gabriel visits Our Lady in her own home – she, from that moment of the annunciation, and throughout her pregnancy, was the new Sanctuary.

But what of Pentecost? When David’s son Solomon had built the temple in Jerusalem, he dedicated it, but in the prayer of dedication asks, ‘But will God dwell on earth?’ (1 Kings, 8:27), in the life of our Blessed Mother we have the definitive answer, and in the giving of the Holy Spirit, God now dwells within us. Robert Southwell in his poem on the visitation writes:

Eternal lights enclosed in her breast

Shot out such piercing beams of burning love

That when her voice her cousin’s ears possessed,

The force thereof did force her babe to move.

With secret signs the children greet each other,

But open praise each leaveth to his mother.

Southwell captures, in a curious way, the mysteries of both the Visitation and Pentecost, for just the eternal light in the womb of the Blessed Mother brought praise from John and Elizabeth; so the indwelling eternal light of the Holy Spirit in each of us can shoot out piercing beams of burning love, causing us to praise God and preach His truth as the apostles did that first Pentecost.

Photo: Isabel Triumphant, from The Crusader Bible (1240s) via The Morgan Library & Museum

MORE ON: FEASTS, OUR LADY, LITERATURE